Caring for the elderly

In early 2021 Revival were appointed to a complex drying project. Over Christmas 2020 a home for the elderly in Oxfordshire was flooded with up to 45cm of water. All parts of the home were affected including the main building with a 300 year old tithe barn and 16 residents’ apartments, six other apartments in a separate building and four terraced cottages.

The main priorities for this project were:

To achieve the best outcome Revival liaised with multiple parties (including contractors, the insurer, loss adjusters, surveyors and business owners) to allow critical works to start rather than waiting for all areas to be dried out, and to ensure that definitive completion dates were set and achieved.

The tithe barn took a large amount of water as it was closest to the ingress from the main road. A tent was installed to dry the floor as quickly as possible. Insulating blankets were used to protect the oak galleried areas and the wooden beams, which were 300 years old. 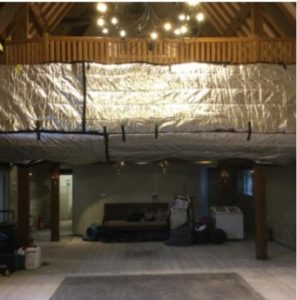 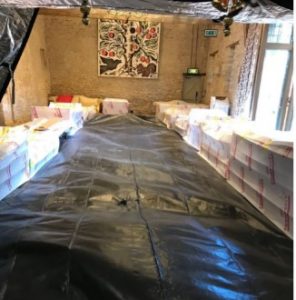 Tenting was also used on the concrete flooring to reduce the impact on the aged beams above as well as concentrating the drying process on the affected low level areas.

Remote monitoring was also used to check progress and ensure damage was not being caused to the old oak.

So that the first floor residents could remain in their apartments Revival built a temporary floor in the communal areas that were being dried, saving the insurer tens of thousands of pounds on alternative accomodation, and keeping the residents safe.

Two of the cottages were dried by a different restoration company. After the residents had returned to those repaired cottages it was discovered that the company had not identified and dried the cavity walls so the insulation was still very wet.

At the insistence of the residents, Revival were appointed to rectify the situation. They removed an internal block and carefully removed the Cotswold stone to allow pipes to access the adjoining properties. This meant that the cavity drying could continue whilst the residents stayed in their repaired properties, saving thousands on alternative accommodation and secondary strip outs and repairs to the two homes. 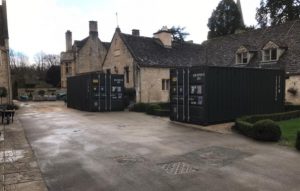 Revival assisted the care team in identifying items that were of sentimental value and those that could be restored or would be worth restoring. They then arranged for four steel containers to be installed on site to store the contents whilst the repairs were being undertaken. Again, Revival saved the insurer many thousands of pounds as the removal, off-site storage and return of the contents of 32 rooms would have been hugely expensive.

Finally, Revival managed to salvage high value commercial kitchen items by cleaning and sanitising them and storing them in a controlled environment. They also saved a specialist hydraulic bath used by incapacitated residents and the gas run laundry room.

The Revival team were on site for three months, working weekends and bank holidays to ensure that this complex restoration project was completed satisfactorily and on time.

Not only did the project come in under budget but it was also delivered on time.

The proactive project management and implementation of cost-saving solutions meant that Revival saved the insurer at least £150,000 on alternative accommodation, contents removals and storage, new equipment and reworks due to failure by the other restoration company.

The team worked sympathetically and with care They:

This is just one example of the high value, complex drying projects that MA Group and Revival manage every week.