Miracle on an Essex street

As we get into the festive spirit this year we thought we would share this feel good story. It’s not quite a John Lewis advert or A Miracle on 34th Street, but it’s not far off. It involves a retired Beefeater, a team of claims elves and a Project Manager who can make Christmas wishes come true!

At the end of September 2021 we were appointed to an escape of water (EOW) claim in Essex.

The homeowners were an elderly couple, Mr & Mrs R. Mr R was a retired Beefeater aged 102 who was rather hard of hearing but still very active. We were authorised to deal with their daughter and we made sure everyone involved in the claim knew that reasonable adjustments were required. Mr & Mrs R wanted to stay in their home whilst repairs were under way so this claim needed care and attention from the MA Group elves.

The leak had occurred in the kitchen and a drying company was appointed by the insurer to dry the kitchen out. 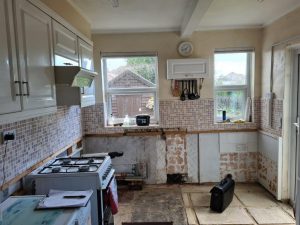 We appointed Building Repair Solutions (BRS) who initially advised us and the daughter that the lead time to commence the works was around the latter part of January.

This was disappointing for the family but they understood the challenges that construction companies have faced throughout 2021.

This should have been a straightforward repair. However the drying company identified a problem with the damp proof course which needed to be resolved before the reinstatement works could start.

The drying company had also ripped out the kitchen units and, although the original pre-scope suggested they could be refitted, new kitchen units would be needed which could cause a delay as a result of the general material shortages in the UK.

The homeowners and their daughter had to arrange for a third party to rectify the damp problem before BRS could start work and BRS liaised with this company to ensure they co-ordinated their works and no time was wasted.

During a conversation with BRS the daughter mentioned she would really like the works completed before Christmas – not only was she was worried about the impact the disruption was having to her parents, but it was her mother’s birthday at the end of November.

So Jack Robinson at BRS turned into Father Christmas and used his festive magic – he had some larger projects that were ahead of schedule so he decided to release some of his tradesman elves from those jobs to squeeze in Mr & Mrs R’s works before Christmas. 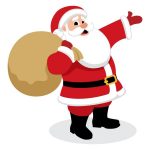 Works started on site on 22nd November. The plan of works included removing all the kitchen units to allow for the damp proof work and to enable the removal and refit of the chipboard floating flooring, which then meant the pipework servicing the radiator had to be removed as well.

However, Mr R informed BRS that he had installed some of the unaffected kitchen units himself and that if they were moved they would fall apart. So BRS and the insurer quickly agreed an alternative plan with Mr R to ensure the works were done swiftly – the units were left in place and BRS installed various layers of smoothing compound to build up the levels and boxed in the pipework. The quality of the work was maintained without causing extra disruption.

Christmas arrived early for Mr & Mrs R – works were completed on 3rd December and Mr & Mrs R and their daughter were delighted. 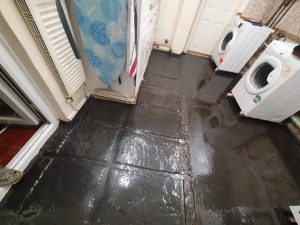 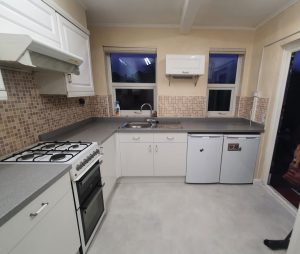 A story to make you smile

This claim is a great example of how MA Group and its suppliers look after those that need it most, find proactive solutions for tricky challenges and keep all parties happy.

The claim included some excellent project planning and co-operation between BRS, MA Group and the insurer.

For example BRS managed to find a kitchen that could be delivered the next day. They telephoned MA Group to explain it was slightly more expensive than the approved provisional sum, but as costs were being saved in other areas could they go ahead and order it to avoid any delays. MA Group quickly called the insurer who gave the go ahead and the kitchen arrived the next day.

The insurer gave us the following feedback:

“Mr and Mrs R are really impressed with how polite and professional the contractors have been. They think the kitchen looks fantastic and are thrilled to have their kitchen back in working order before Christmas.”

“..it is a great little story and did make me smile.”

Well done to Jack Robinson and everyone involved in this claim at BRS.

We wish all of our clients and suppliers a Happy Christmas and we look forward to solving more claims problems in 2022!