The UK Government is introducing new building regulations and legislation to reduce carbon emissions from the UK’s housing stock and to address shoddy workmanship and the cladding scandal:

This briefing summarises the changes and how they will impact the property insurance claims industry.

The Department for Levelling-Up, Housing and Communities (DLUHC) has set out the changes, comprising five new Approved Documents, in its response to a public consultation on the Future Buildings Standard that concluded in April. The announcements impact both new homes and existing homes.

The Building Regulations changes come with £6.6 billion of direct investment into improving the energy efficiency of buildings, the UK Government says.

There is a one-year transition period to allow for planning applications underway at that time. The Approved Documents are available at https://www.gov.uk/government/collections/approved-documents. 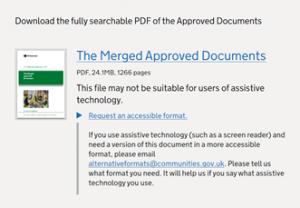 Uplifts to Part L and Part F of the Building Regulations mainly relate to extensions and new minimum standards for energy efficiency – for example, there will be a new efficiency metric for the whole house calculation method for new extensions, and extensions to existing properties must now adhere to the SAP method of compliance for metrics of fabric energy efficiency and primary energy. According to the Government this will ensure that “direct electric heating systems” are not used in unsuitable circumstances resulting in high bills for householders.

The impact on property reinstatement works will be limited, but there are key changes that will have to be considered by contractors and insurers when larger reinstatement projects are planned:

These new Building Regulations will impact the house building industry significantly, at the same time that the New Homes Quality Board and its new code of practice comes into force.  These are aimed at improving quality for new build homes and offering stronger protection for new home customers, particularly in relation to customer care. To find out more please go to https://www.nhcc.uk.com/new-homes-quality-board/.

In summary the new Building Regulations include:

The Building Safety Bill is going through Parliament and will bring in changes to current legislation. It will increase the period of time in which building owners, homeowners and leaseholders can make a claim for compensation following the completion of defective work by extending the limitation period for claims brought under section 1 of the Defective Premises Act 1972 and under section 38 of the Building Act 1984.

The Government wants householders to be able to claw back money where they have had to pay out for cladding replacement, so the limitation period will be extended retrospectively (i.e. for work already completed) from 6 to 30 years. This means that householders can make claims for work that was completed up to 30 years prior to the relevant provision of the Bill coming into force (i.e. back to mid-1992 if the Bill completes its passage as expected in the middle of this year).

For work completed in the future, after the Bill has been passed, the limitation period will be extended prospectively from 6 to 15 years.

The Government is also expanding the Defective Premises Act to include refurbishment and other work to an existing dwelling. This means that contractors who undertake any work on any dwelling (or any building containing a dwelling, such as a block of flats, even if the work is done to a non-residential part of the building) will be required to ensure it is fit for habitation when that work is completed with respect to that work. If they do not do this, a claim for compensation can be brought.

This change will allow homeowners to seek compensation through the civil courts for unacceptable work undertaken on their properties. As this is a new provision, this change will only apply prospectively (i.e. only to work completed following commencement of the Bill).

Compensation can be claimed by the person who originally commissioned the work, or by any person with a “legal or equitable interest” in the dwelling. This would include the freeholder of a block of flats, a person who subsequently buys a house, as well as leaseholders of flats.

This Bill will have more of an impact on our industry than the Building Regulations changes as it covers all refurbishment and reinstatement works. Compensation can be claimed from anyone responsible for the defective work, such as builders and other contractors, architects or designers. As compensation can be claimed by the person who originally commissioned the work, a claim could come from the householder or the insurer.

Consumer rights law already allows homeowners to make a claim for faulty workmanship up to 6 years after the works were done. This new legislation could result in claims from homeowners up to 15 years after a reinstatement programme of works has been completed. Customers who have reinstatement works carried out in their home, that are subsequently shown to be so defective that the property is not fit for habitation, will be able to claim compensation through the courts. For a dwelling to be fit for habitation, it must be capable of occupation for a reasonable time without risk to the health or safety of the occupants, and without undue inconvenience or discomfort to the occupants.

The reference to undue inconvenience and discomfort to the occupants could become rather subjective, but this sort of language is similar to that used by the FOS and FCA when dealing with complaints from customers, so this new legislation may have an impact on FOS decisions.

For insurers and intermediaries: